The Old Theatre Inn family originates from the surrounding villages, bringing with us the local charm and traditional hospitality of Shaxi China. For the last nine years, led by partners Wu Yunxin, a cultural heritage expert and American designer Chris Barclay, we have continuously learned about western guest expectations and how to exceed them. In addition to learning English and hospitality management, we share a commitment to learning about the interests of our guests, and introducing them to the unique culture of Shaxi. To read more about our staff, please see our introductions below.

To be a source of inspiration for our guests through the beauty of our surroundings, people and facilities.

Our Vision
To be a world-famous, first choice of travelers to Shaxi who seek authentic, environmentally responsible accommodation.

Superior value: providing world-class service with outstanding food and comfort, attention to details and always offering more than is expected.

Localhood: being model neighbors and corporate citizens who support local welfare and culture while treating our guests as temporary residents.

We are a self-designated "China Heritage Hotel" a name we created in 2015 to describe our unique position as custodians of a listed heritage site that also offers accommodation. This entails putting environmental preservation and cultural heritage as our top values; honoring the past while creating a world-class accommodation experience. Our focus is also on localhood - the belief that developing local people who work at Old Theatre Inn and including guests in celebrating our local culture is the key to our success. As our website demonstrates, we are not just a hotel but a stakeholder in the development of responsible tourism in Shaxi, offering professionally created maps that promote exploring Shaxi on foot and by bike.
We are also active in creating a virtuous circle of responsible vendors and commercial partners in the villages and old town. These are people who share our values of localism and who hold high stanrds of quality and service. We will only recommend our guests to those locally run businesses who can offer our guests an authentic Shaxi experience. Our goal is to remain a simple and honest family-run country inn where people from all over the world can go to experience the beauty and serenity of Shaxi. 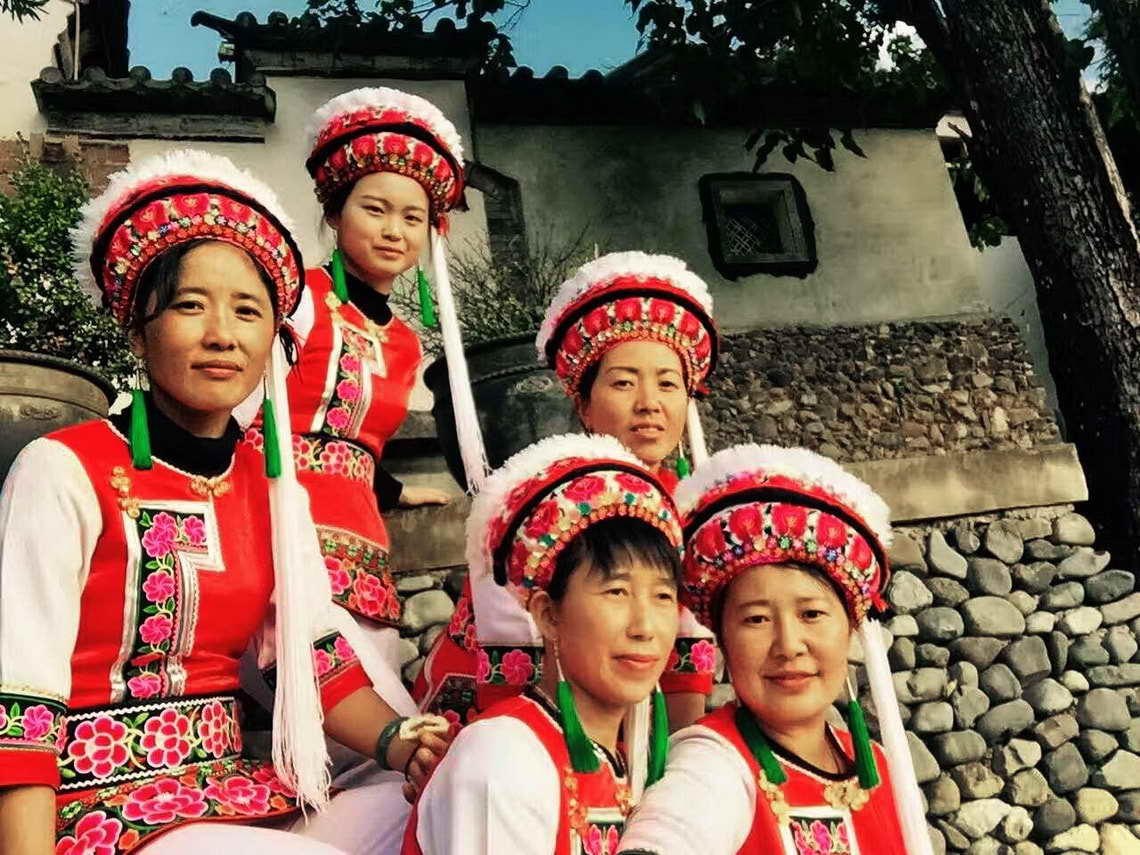 My name is Jessica, Chinaese name is Zhangjie. I'm 27 years old and from a quiet village in Shaxi. My hobby is dancing and playing games. I have a happy family. There are five people in my family. My father is a civil servant, my mother is a housewife and my husband is a graphic designer. He runs an advertising shop. I have a three year-old daughter I like English and hope some day I'll be able to travel abroad, and speak English with foreigners. I work at Old Theatre Inn, and love this job because hotel management and reception is meticulous work. Every satisfied guest is the best affirmation to me. The job is not only lets me improve my communication, but also realize the importance of service. So I'm in progress and learning every day which is very meaningful.

My name is Yang Shixiang and I am from Duan Village. I have five people in my family and am 42 years old this year. My hobby is to make things by hand. My personality is frank. I have enjoyed working at Old Theatre Inn for seven years.

I have been working as a chef at Old Theatre Inn (formerly Dragonfly) for over 10 years. My character is friendly, helpful and hardworking. I understand the needs of our guests, and do my best to bring them a memorable experience at our inn. I grow vegetables in my garden next door and cook in a traditional way to create the opportunity for visitors to taste local and authentique Shaxi food.

I'm Yang Yinfu but everyone calls me San Mei because I am the third sister in my family. There are six people in my family and I live next door to the Old Theatre Inn, working here for six years. I have many hobbies and a cheerful character. I'm very enthusiastic about my work at Old Theatre and have an energetic mind and enjoy being industrious in my daily life.

My name is Duan Qihui, and I live in Duan Village. I share a surname with many people in this village which is also home to Old Theatre Inn. My work as General Manager for six years here is very happy, because every day there are guests from different countries who I treat as my family with a smile, enthusiasm and a warm reception each day. Guests feel the warmth of home. I like this job very much and. I will continue to work hard, improve our service attitude. Wishing all our guests happy every day!

WORK IN SHAXI WITH US

The Ginkgo Society, an American cultural heritage conservation group that renovated the Pear Orchard Temple also hosts student groups in Shaxi. As part of these activities, we have a homestay opportunities in the village of Xia Ke, located 20 minutes walk from Shaxi Old Town. This is very simple local accommodation with modern toilets located in the back courtyard. The courtyard is available in between student groups for those who can help with needed farmwork or teaching.
The Li family whose courtyard is used for student groups have 1 mu of land that grows a variety of crops throughout the year so there is occasionally work to be done there. In addition, the Old Theatre Inn, which sees many foreign visitors each year, is surrounded by fields that beloong to families of staff. For those who have basic farming skills, we can arrange meals and possibly rooms at the old theatre for limited periods throughout the year. To check on specific dates, please contact us here.

Sam, Jessica and our other ladies all need opportunites to keep improving English skills. If you have a background in education, are an experienced traveler and would like to enjoy free room and board in January and February, we would be interested to work with you. The Pear Orchard Temple also needs English teachers for our chef Madam Yang and her assistant Xiao Zhang. Some things we also are interested in from volunteers:
• Help us train us in service skills for the Pear Blossom vegetarian restaurant in the temple.

• Help us to develop and promote a local handicrafts project • Help us prepare / design and perform an awareness campaign on sustainability principles towards local people, for the whole valley, focusing on waste management and clean water.

• Teach our local staff how to bake cookies and simple cakes

If you have particular experience in any of the above areas we are interested to have you. Our accommodation is a homestay family courtyard, halfway between the Old Town and Old Theatre. We can provide a simple breakfast and lunch. Please let us know one month before you intend to arrive and we can tell you what we have available. We don't know at this point how many if any other volunteers will be engaged with us at the time you would like to be here. For teachers, we'd like someone with at least a year experience teaching basic English. Please send us a brief resume or background on your experience.

While both Duan Jiping and Yang Yuju, our chefs at Old Theatre Inn and Pear Orchard Temple are accomplished local chefs, we are always interested to learn new food preparation ideas, particularly baking. We welcome experienced chefs to work with us on a volunteer basis in exchange for room and board in Shaxi. We can also assist with visas for longer-term work.

If you are a professional or highly accomplished photographer or digital film maker, we are interested to work with you on helping us visually tell the story of Shaxi and our projects here. Please contact us through this website below if you have the background and interest for this project.

PM: How did you get into historical restoration?

CB: I saw so many great buildings being demolished in cities across China, I thought if I ever had the chance, I would buy something and re-purpose it, so that more people could come and appreciate it and see that it would be worth saving. Maybe this would inspire others to do the same.

PM: Where do you think your urge to preserve things comes from?

CB: I went to Cranbrook School outside Detroit, Michigan in the U.S. The campus consists of an art academy, art museum, girls school, boys school and museum of science. The buildings themselves are all on the national historic register, built by architects such as Sarinen, Wright, and with artwork around campus from Calder and many others. The chapel was built with stone brought from Kent, England and the boys’ school design is also based on a very old school in England. So the whole place is a living work of art and I developed a deep appreciation for design.
When I came to China, I saw so many beautiful vernacular buildings in Beijing that had been abandoned, used as dumps or turned in to coal depots. I felt it was a shame that no one cared for these places. To lose one’s heritage is really something that you can never buy back.

Founded in 2012 in thanks for the birth of his daughter, American designer and China entrepreneur Chris Barclay founded the Ginkgo Society. It is a social enterprise based in Dali Yunnan that focuses on sustainable development in Shaxi. Find out more on the blog which documents the rebuilding of the Pear Orchard Temple and other service projects in Shaxi here.

ONLINE RESERVATIONS
Guest reservations can be guaranteed by PayPal payment，bank transfer and Visa or Master card information. Old Theatre Inn reserves rooms on a first-come-first-serve basis by PayPal guarantee. To reserve our rooms, we require a guarantee payment of the full room charge, paid in USD or EUR within 48 hours of confirmed booking.

DISCOUNTED BOOKINGS If following confirmation, the number of rooms or nights originally booked are reduced, the discounted rate will no longer apply and the standard room rates will apply.

4 TO 6 DAYS
Cancellations made between 4 and 6 days before arrival date (not arrival time) will incur 30% of total room night charges.

7 DAYS OR LONGER
If the guest cancels with at least 7 days notice from arrival date, there is no charge.

BLOCK BOOKINGS
Reservations of three or more rooms are regarded block bookings. Guests wishing to cancel the booking within 15 days prior to arrival will forfeit their deposit.

THIRD PARTY BOOKINGS
When accommodation is reserved by a third party, the cancellation charges automatically become the responsibility of the third party.

EARLY DEPARTURE
If a guest decides to leave early for any reason other than the direct fault of Old Theatre Inn (ie; plumbing, electric, service-related failures) or un-controllable environmental phenomena, (floods, pandemics, political unrest), the guest will forfeit the amount in full for the subsequent room night on the day of early departure notification, and 50% of room charges for the remaining room nights on the reservation. Old Theatre Inn will always inform guests in writing prior to their arrival of any issues related to the above that may affect their stay. Should Old Theatre Inn fail to inform the guest in advance of any relevant issues affecting their stay, there will be no charge for early departure.

PLEASE ADVISE US IMMEDIATELY IF YOU NEED TO CANCEL OR ALTER YOUR BOOKING IN ANY WAY Failure to do so will be deemed as acceptance of the above conditions. All amendments or cancellations must be made in writing (email or fax), canceling by telephone is not acceptable. We respectfully remind guests that a reservation made verbally or in writing, constitutes a legal contract between themselves and the Old Theatre Inn.